Read Doug Dodd’s amazing, reckless, teenage tale of too much,
too soon. His devastating crash-landing.
And maybe -- just maybe -- redemption…

If I wasn’t in a high school class or
with the wrestling team, I was working
40 hours a week, minimum wage,
every day. Non-stop.

And then it all got flushed.

Taking me with it.

“Generation Oxy is a straight-from-the-headlines story of Florida high school kids who raked in millions riding the OxyContin wave and became one of the country’s largest narcotics trafficking organizations in just a few years. Their tales of excess will have you shaking your head and turning the pages.”
—Bruce Porter, author of Blow: How a Small-Town Boy Made $100 Million with the Medellín Cocaine Cartel and Lost It All

“Generation Oxy offers a fascinating first-person glimpse into the human tragedy of the prescription drug epidemic sweeping across the country, an unfolding saga of corporate greed, medical malpractice, and the awful logic of addiction. Doug Dodd was just a kid when he realized he could get rich dealing oxy, a decision to roll the dice on drug dealing that forever changed his life.”
—Guy Lawson, New York Times bestselling author of Arms and the Dudes: How Three Stoners from Miami Beach Became the Most Unlikely Gunrunners in History

“Heart-pounding, adrenaline-rushing insight into the world of teenage gangsters dealing in prescription drugs. A roller-coaster ride of highs and lows as the kids make millions, Dodd and Cox’s book is a thoroughly enjoyable if chilling read.”
—Tim Newark, author of Boardwalk Gangster: The Real Lucky Luciano

“With drugs, cash, and teens, Generation Oxy is Scarface on spring break. Douglas Dodd’s fast-paced tale of his meteoric rise from poverty to teenage drug lord pulls back the curtain on how America’s opioid addiction was ignited and fueled.”
—Jen Antonelli, two-time Emmy-winning producer of Crime Watch Daily with Chris Hansen

“Another compelling story of America’s failed war on drugs, Generation Oxy makes it clear that the real kingpins are the executives of Big Pharma and the legislators who perpetuate this horrific fiasco.”
—Richard Stratton, author of Smuggler’s Blues and Kingpin

“An original but classic tale of rags to riches. This story has it all—hardships, corruption, love, money, greed, and turmoil. An underprivileged kid with an entrepreneurial spirit was given an opportunity for success and he took it. A must-read.”
—Anthony Curcio, author of Heist and High and Amazon top-sellers, Stephen Curry: The Boy Who Never Gave Up and Lebron James: The Boy Who Became King

“[Dodd’s] writing is very sharp and he knows how to tell a story…clearly talented.”
—Richard Schapiro, reporter for GQ

“It reads like a movie script: a well-liked teenager and high school wrestler makes millions of dollars selling opioids with his friends, all while remembering to mow his grandmother’s lawn. His life of pills and sex turns harrowing as he faces life in federal prison.”
—Rebecca Morris, New York Times bestselling author of If I Can’t Have You and A Killing in Amish Country (both with Gregg Olsen), and Ted and Ann—The Mystery of a Missing Child and Her Neighbor Ted Bundy

(and the story behind his story…)

Generation Oxy is a monument to collective irresponsibility. At several points in the story you will find yourself asking, “How did that happen?” Of course, at the center of it all was high-school wrestler Doug Dodd. It goes without saying that he made some terrible choices. We’d all agree that illegally obtaining thousands of OxyContin pills is reckless and irresponsible. Forming an interstate network of dealers to sell those pills isn’t the wisest move. And, in retrospect, Dodd probably should’ve partnered with somebody, anybody, other than Lance Barabas, a self-destructive wild man who seems genetically constructed to defy authority in all its forms. But Doug Dodd’s story is not possible without the moral and ethical failings of society’s most important institutions.

The Rest of the Story

Doug Dodd’s story was unlikely, fantastic, foolish. And for a year or two, a money machine beyond any trailerpark musclehead’s wildest dreams. Along with his hard-living wrestling buds, he was living a drug-fueled teenage-Scarface dream. (Note the poster on his wall.) Then just as suddenly -- it was over. And then, from prison, his email caught the attention of a writer at Rolling Stone… 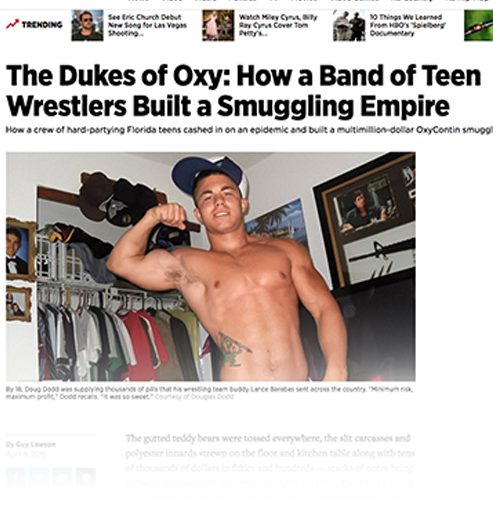 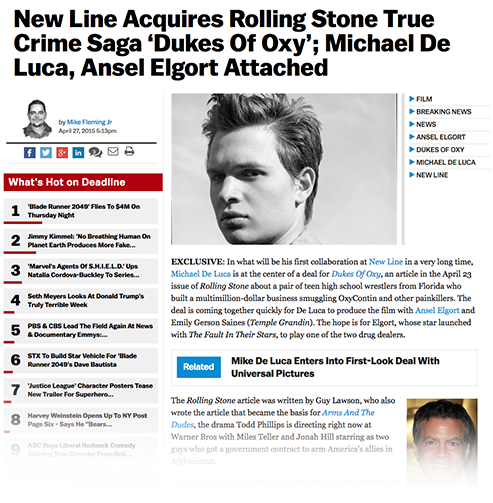 From the bottom, sometimes the only way is up. Doug Dodd’s new life is dedicated to helping others who suffer from the Oxy epidemic find a way out. And a way home. 10% of all sales from his website will go to charities fighting a plague that’s threatening our country.
And that’s a cure you can be part of…